We had an inkling that it was coming but E3 has confirmed it - The Witcher 3 is indeed heading for Switch in what must surely be one of the most challenging ports yet delivered for Nintendo's hybrid console. The conversion is being handled by developer Saber Interactive, known for its work on the Halo and Halo 2 Anniversary Editions, working in concert with CD Projekt RED, while the mothership concentrates on delivering Cyberpunk 2077 for April next year. But just how well can a port of one of the current generation's most challenging games work on the Switch's Tegra X1 processor? Initial footage revealed this week is fascinating.

There's clearly a need for a lot of smart adjustments in transitioning a game of this magnitude across to the Nintendo hybrid - beginning with the resolution. CDPR has been pretty up front about what we can expect. On Twitter, the studio says that the game operates at a dynamic 720p while docked and 540p while handheld. Analysis of the small amount of footage released to date shows a native 1280x720 at the top-end, dropping to 896x504 at the minimum. Remarkably though, from the small amount of footage seen so far, native 720p is a surprisingly common result from pixel counting tests. 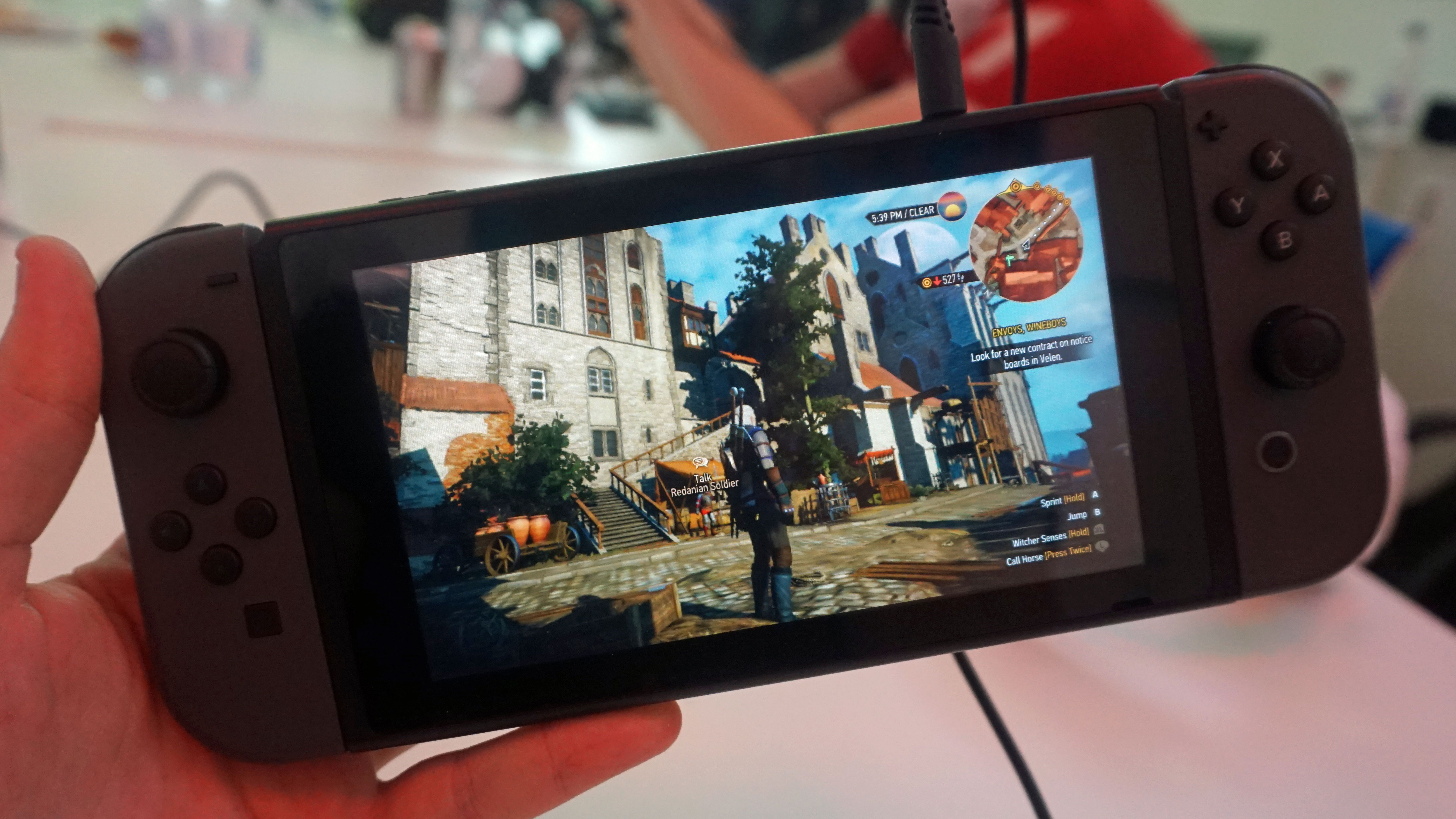 In terms of how close the game's visual make-up gets to the other consoles, I captured the PlayStation 4 version for some ballpark comparisons - but conclusions will necessarily be limited and preliminary here. We have just 30 seconds of in-engine gameplay to work with and a few high quality PNGs. Despite looking at docked play, needless to say it pales next to the PS4 game, rendering as it is at a native 1080p.

The Switch port of Witcher 3 is a true example of port mastery, once again proving that so much is possible on Nintendo’s portable as long as you’re willing to give up a little bit of graphical.

Given the complexity of the game and Switch's mobile-orientated hardware, first impressions still suggest an impressive technical feat. The only snag is that anti-aliasing quality is evidently low, which can make the stair-stepping stick out. Playing handheld may well be a better way to evaluate the Switch version's strengths - despite the resolution drop, the smaller screen usually works well in mitigating reductions in fidelity.

As things stand, clear drops in engine settings are evident: foliage and characters draw distances take a hit on Switch, and so, the environment is less populated at range. Comparing one CDPR's press shots of the lush Toussaint area to the PS4 version reveals lower-grade grass transparencies and decreased overall density. World detail is closer to PC's low settings, then, while texture quality is also significantly pruned back - as you would expect with only 3.5GB of useable RAM available to developers on Switch. Ground texture detail is also reduced on the Nintendo hybrid, possibly a factor of reduced anisotropic filtering and less sampling owing to the much lower pixel count.

Last but not least, shadow resolution and the SSAO set-up are on the receiving end of a cut as well. In short, it ends up giving the Switch output a lighter appearance overall. In fact, it looks like ambient occlusion - the shade between objects - is either cut out completely or running in a limited capacity, which does make sense.

Crucially, the core detail - the framework of the world - is still very much in place. It's also quite miraculous bearing in mind that the final game is set to occupy around 32GB of space on your SD card. The PlayStation 4 release is over 60GB in total, demonstrating the scale of the challenge facing Saber Interactive. Even the promised 32GB goes beyond the typical cartridge size of Switch games; potentially it could store the base game on cartridge and require an extra download, say, for the two expansions. Again this is unchartered territory. The scale of the project goes beyond anything we've seen on Switch so far.

Every chop and change is a necessary for performance. How Saber Interactive ends up balancing frame-rate with visual quality will be fascinating to see. The trailer itself is only a 30fps encode, presumably to match the target frame-rate of the game. The feed isn't good for getting a precise lock on performance in terms of frame-times, but the fact that the entire sequence plays out with only the slightest of wobbles at least bodes well.

What excites us about this port is just how challenging it is for the Switch hardware on just about every level: its CPU and memory bandwidth requirements push the current-gen consoles - and unlike the Doom and Wolfenstein conversions, Saber Interactive couldn't drop frame-rate from 60fps to 30fps. Instead, it has to target the exact same performance level as PS4 and Xbox One. Meanwhile, the RED Engine doesn't exactly take it easy on the GPU either; we have some idea of the cuts here, but just how much harder will Saber have to push to get areas like Novigrad and Crookback Bog operational on Switch? Add all of that to the task of reducing the game's storage footprint almost by half and you have what must surely be one of the most ambitious game conversions of this console generation. Suffice to say that we'll be following this one with plenty of interest.

Will you support the Digital Foundry team?

Digital Foundry specialises in technical analysis of gaming hardware and software, using state-of-the-art capture systems and bespoke software to show you how well games and hardware run, visualising precisely what they're capable of. In order to show you what 4K gaming actually looks like we needed to build our own platform to supply high quality 4K video for offline viewing. So we did.

Our videos are multi-gigabyte files and we've chosen a high quality provider to ensure fast downloads. However, that bandwidth isn't free and so we charge a small monthly subscription fee of €5. We think it's a small price to pay for unlimited access to top-tier quality encodes of our content. Thank you.