It stands chipped, battered and neglected. 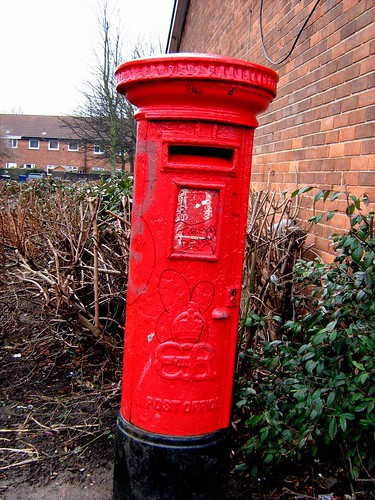 But this sad pillar box in Week Street, with its torn-off stickers and graffiti, is actually a unique part of the town's history.

Look at most pillar boxes and you will see they are embossed with the letters EIIR - short for Elizabeth the Second Regina.

But look closely at this one, which stands in front of Premier Cellar, and you will see it is marked EVIIIR.

It's not a mistake. It stands for King Edward VIII.

Edward was king for only 326 days in 1936 (from January 20 to December 11) before abdicating over the scandal of his desire to marry divorcee Wallis Simpson.

'Builth Wells has the distinction of having the only post box in the United Kingdom bearing the cypher of King Edward VIII, the uncrowned king whose abdication in 1936 caused a constitutional crisis.' The source being Wikipedia. I should edit it, but perhaps it's a third Ludlow type!

During his short reign only 163 pillar boxes were made bearing his initials, and today only 130 survive across the whole country.

This one in Week Street is the only survivor in Maidstone and there is only one other in Kent - in Nunhead Lane, Ramsgate.

Mike Alexander from St Luke's Road, Maidstone, said: 'It really is a shame that when so much is being done to refurbish Week Street with new paving, this pillar box is left in such a poor state. It is after all an historic monument.'

There are approximately 116,00 pillar boxes in total across the country.